One of the main problems of the current navigation algorithm is that by giving humans their own space, there can be situations in which this space blocks the path of the robot. In these cases it is necessary for the robot to approach the person who block him to request permission or collaboration. For this aim, it is required for the robot to be able to detect which humans block the road and which humans do not. The original navigation algorithm did not have any method for it, so I have created a new function to find out which humans block the path of the robot.

When the robot plans the trajectory towards its objective, it does so based on a free space graph, which has already been mentioned in previous posts. In this graph are included people in the environment, as well as their personal spaces. If the robot does not find a path to its goal, it calls the new function called checkHumanBlock. Below is explained the performance of this function:

Changes in the Social Navigation interface and new functions implemented

The previous picture shows the new interface of the social navigation component. Four new functions have been implemented. These functions are explained below:

In the first place, this function has been created to allow the robot to approach a person with the objective of interacting with it. To do this, a button has been included that, when pressed, sends the robot to the front of the person. For the selection of the person a ComboBox has been created where the ids of the people present are inserted. This function can be used in a future along with the one explained above to approach people who block the path to ask permission or collaboration.

Finally, a CheckBox called pass on right has been created. With this it can be selected the social behavior of passing on the right of the people. This function was introduced by Yohan, a student of the last GSOC. If this option is selected, another gaussian curve turned to the left will be created which, when planning, will make the robot’s route pass by the right of the people if possible. The gaussian curve will only apply to individual people and not to those who are maintaining an interaction.

The following picture shows the new gaussian that makes the robot plan the shortest route going through the right of the person. It can be seen in green bars the path that the robot follows. 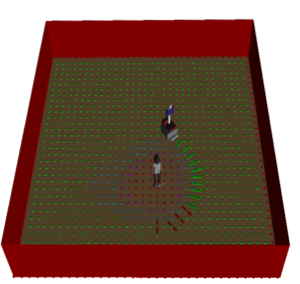