With the first approach we have a problem. If we preload an enviroment with two cups on the table, the camera would start by locating these two, but, if they does not exist and it detects two new cups, then, the timers would start. They would alternate attention, then, if a part of the table had not been watched at the beginning, it would has never been looked. You can see it on next image: 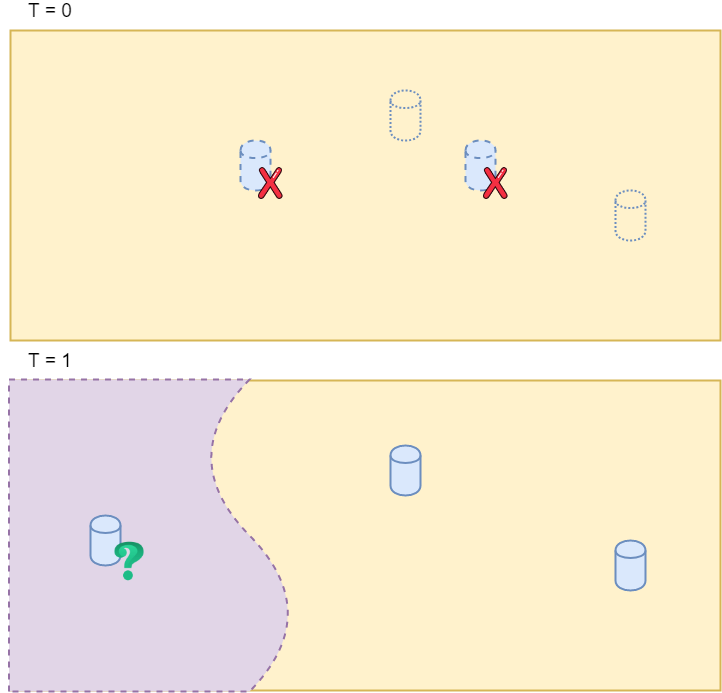 The purple zone has never been visited, so the system don’t know anything about it. It can not control if there is an object or not.

To improve the camera move, I modified the initial approach of having a counter for each object. Instead, I added a calorific map that controls the movement of the camera from one place to another on the table, this way, it does not leave areas unvisited, or only visit areas where there is or has been an object.

This map is presented as follows:

To create the map, I used the class std::unordered_map <Key, Value, KeyHasher> , where Key is a pair that stores the (x, y) coordinates of the upper left corner of each cell in which the table is divided; Value is a structure that stores the (x, y, z) coordinates of the cell and its temperature; and KeyHasher is the hash code used to index the map.

Initially, we must fill in the map to know the position of each cell and, later, to be able to process them. It starts by dividing the table into cells of 40x40 mm and storing the coordinates of its upper left corner and its temperature to zero.

The method of the main thread that decided if the camera was moving according to the timers, must be modified to use the thermal map as a guide for the movement. At this moment, all the cells of the map of the table to which attention is being paid are traversed and the one with the lowest temperature is calculated. When the temperature of the cell with the lowest temperature is lower than a fixed threshold, the rotation angles that the camera needs to point to this cell are calculated. In this way, we go through all the zones of the table updating the innermodel. At the same time, the simulation of innerviewer is shown what is added or deleted in the .xml.

To move the camera depending on the map I have created three methods:

The Gauss heating function has been simulated with an implementation that calculates where each cell of the table is perceptible at that moment by the camera and according to its position with respect to the projection in the plane of the chamber heats up more or less. Visually, this function would be shown as in the following image: 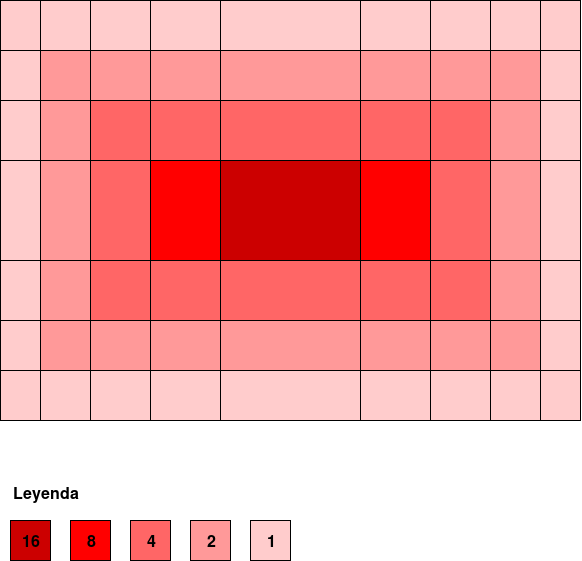 On the camera capture the different cells of the grid of the table that is observed at that moment would be projected and, according to the position within the filter in which they were, the temperature would increase in one way or another. In the central part, as can be seen, the cells would be heated with greater intensity than at the edges, exponentially.

To cool, we need to take the position of each object on the table and calculate according to its dimensions (80x80x80) which cells of the calorific map would be touching. These cells would be the ones that would cool at a higher speed, although the rest of the map would cool down, as I said, constantly up to a fixed threshold.

These variations in temperature are what finally follows the algorithm of the system that moves the position of the engines. The camera always moves to the coldest areas of the map so that there are no unsupervised areas.

The result of applying the functions of cooling and heating on the map is better than the previous form of timers, because those only depended on the objects that had previously detected or that were pre-loaded. In this way, if the camera accidentally detected objects in areas of the table visible at some point in the execution, it took them into account, but if they were not visible to the system, or preloaded, it would not know about their existence because it would leave areas of the table unexplored. With this improvement, we get that, although there are no objects in an area of the table, it is fully explored by getting more accurate information or more information.