This period has been up for almost a full month. During these weeks, I’ve got the chance to discover the inner workings of LearnBlock, adapt myself to working in a public project, communicate with my mentors and (finally!) write code and implement features.

During the first days, I didn’t have much idea about where should I look. Yes, I’ve had previously submitted a PR making simple changes to the parser, but it was not enough. Fortunately, my mentors were very helpful: they provided constant guidance through my first big changes, and gave me useful hints to speed up debugging and prototyping.

I think this goes in line with what makes the Open Source community great: you don’t have to work alone, because you get to know people which makes your journey a bit easier.

At some point during these changes, right before trying to implement a type checker, I’ve noticed that it was going to take quite a bit of effort to handle all the different nuances in the behavior of each node. The entire code generation was procedural, with some global variables which made difficult to follow the flow of the program state.

I decided to turn it into a little class hierarchy, where each node was an instance of a class, in turn descendant from a generic Node class. There were lots of advantages supporting this transition:

After doing these changes, I’ve asked my mentors for feedback. They liked the changes, so I could now focus on new features…

This was one of the deliverables proposed. The type checker takes a parsed syntax tree and checks for every subexpression if the inferred type matches the expected one (both parameters and the return type). The types added are simple, number (both integer and floating point), string and bool.

Even if testing and implementation were done at the same time, I wanted to check it thoroughly. I ran both the upstream parser and my version, trying to generate Python code and look for differences. The generated code was always equivalent, but now errors could be detected and located!

I showed these results to my mentors, and made a PR which got finally merged. 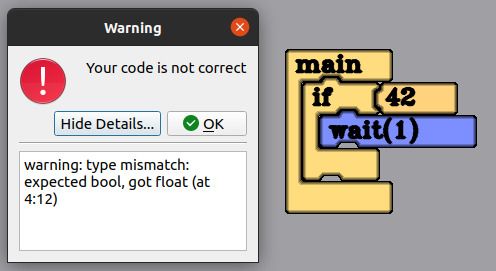