Dataset Creation and other updates

In this article, I will talk about the dataset I created for training Hand Gesture Recognition models. Also, I will mention some of the other updates made in the project.

Aim of the gesture recognition component is to recognize hand gestures from hand keypoints. Even through a lot of datasets are available that maps hand image to the American Sign Language gesture, no dataset is available which maps keypoints to the gestures. So I decided to create one by my own. For this, I used ASL Alphabet dataset available publically on Kaggle. The dataset contains 87,000 images which are 200x200 pixels. There are 29 classes, of which 26 are for the letters A-Z and 3 classes for SPACE, DELETE and NOTHING. Schematic representation of gestures is mentioned below: 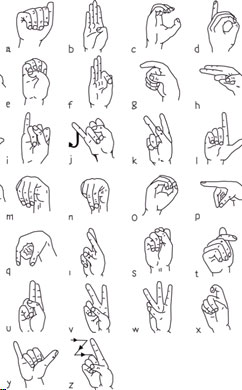 Then I processed this dataset using the already implemented Hand Keypoint detection component (using Mediapipe method). After passing every image through this module, I obtained required keypoints to gestures mapping, which I saved as a numpy array (which according to me will be easiest to process later).

On suggestions from mentors, to make Hand Gesture Recognition Component more useful and applicable, I made some changes in the implementation of this component. Now handGesture Component have two functions:

For now, users can only set the classes which are subsets of the ASL alphabets. We earlier thought of implementing this for any general use case, but there were some issues like:

Due to time constraint, we decided to stick with ASL alphabets as superset.

I have updated Model used in bounding box detection to a better one. Even though the underlying method used is same (MobileNet + SSD), this model is trained on larger dataset and hence provide better accuracy.