In this post, I discuss the whole working pipeline after integration and show the first demo of Gen3 arm grasping using DNN-estimated poses.

Let’s start with discussing the final work done with the pose estimation components :

To perform the grasping tests, I used the new Gen3 arm. However, I had to add some modifications over the arm to ease the pose estimation and path planning stages :

So far, I have completed the pose estimation DNN implementation and training, created two pose estimation component and tested them. Moreover, I have created the path planning and grasping pipeline. So, now it’s time to integrate the whole pipeline and test it. I developed a separate component named viriatoGraspingPyrep, which includes the work done with path planning and grasping. Also, it connects to the pose estimation component to estimate poses from RGB(D) images captured by the arm’s shoulder camera. The system integration goes as follows :

This way, the arm can detect and grasp any of YCB-Videos dataset objects within its camera sight.

After finishing the integration, I had to test the whole pipeline in an initial setting. The test setting is simply a can, for which the arm has to move based on the DNN-estimated pose. So, here are the results of the first demo : 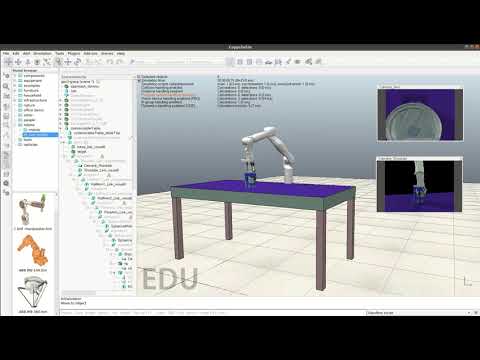 Figure(3): Visualization of the DNN-estimated pose in first demo.

Finish the work with path planning and the whole pipeline integration.