In this post, I show the final results of object grasping, using the entire pipeline. Also, I share our integration strategy with DSR graph and the new architecture.

In the previous post, I showed the complete system integration and the results of path planning using the estimated poses. However, the system should be tested on object grasping and manipulation, as well. Consequently, I managed to extend the embedded Lua scripts with gripper control functions. Then, viriatoGraspingPyrep component was updated to call these scripts using PyRep API. This way, we have a complete grasping pipeline in viriatoGraspingPyrep component, which goes as follows :

Following this procedure, I managed to integrate the full grasping pipeline and create a full demo for grasping using DNN-estimated poses. I used an ensemble of both RGB and RGBD estimated poses to perform pose estimation. Also, I included multiple objects in the scene to provide more challenge for both pose estimation and grasping. 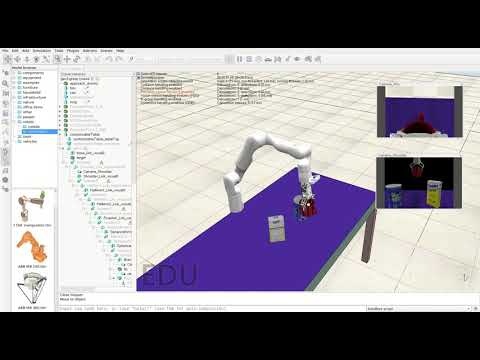 Figure(2): Visualization of the DNN-estimated pose in second demo.

As shown in the figure, the components workflow goes as follows :

Finish the whole grasping pipeline and create a complete demo.