Evaluation of the models

We have five different models to evaluate:

All these models have been got from TensorFlow 2 Detection Model Zoo and have been trained in the COCO 2017 dataset.

The metrics are going to be the typical used in the COCO dataset, apart from them we have added the average prediction time and the necessary memory as they have an important role in low computational environments. The average prediction time information have been got from the repository of the models as is standardized and the necessary memory has been measured according the weight of the compressed file that have all necessary to use the model. Respect to the metrics of the COCO dataset have been obtained doing the evaluation in the validation dataset of COCO 2017.

Firstly, we need to transform the dataset to a compatible format (tfrecord), we can get the data in this format using this script from the Tensorflow Object Detection API.

After that, the process is pretty straightforward so we need only to execute the following command in the directory research in the repository of the models with each model:

Only is necessary to configure the pipeline config with the path of the label map and the data converted to tfrecord. Also, all the files for the command are provided by the compressed file downloaded from the repository. 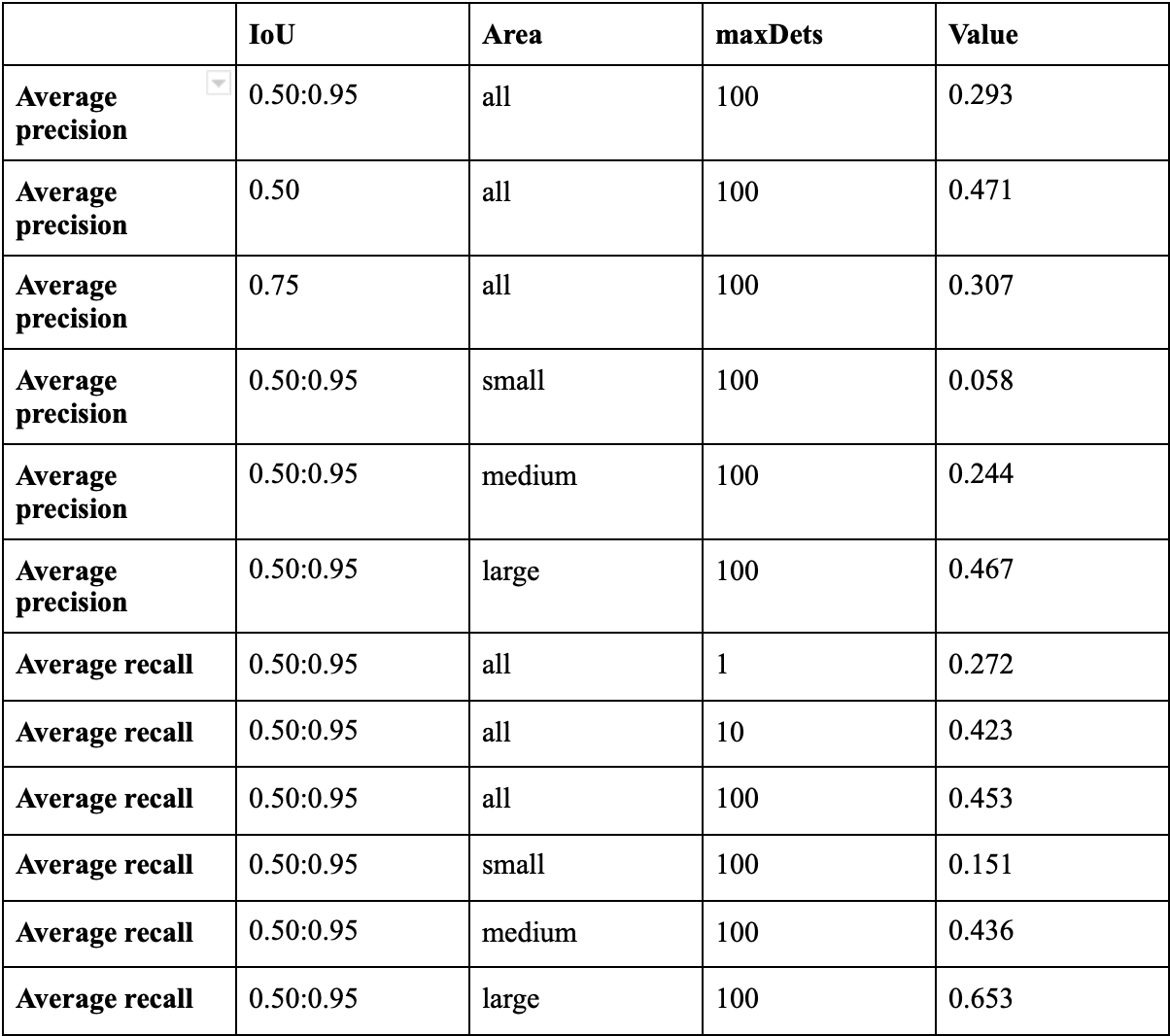 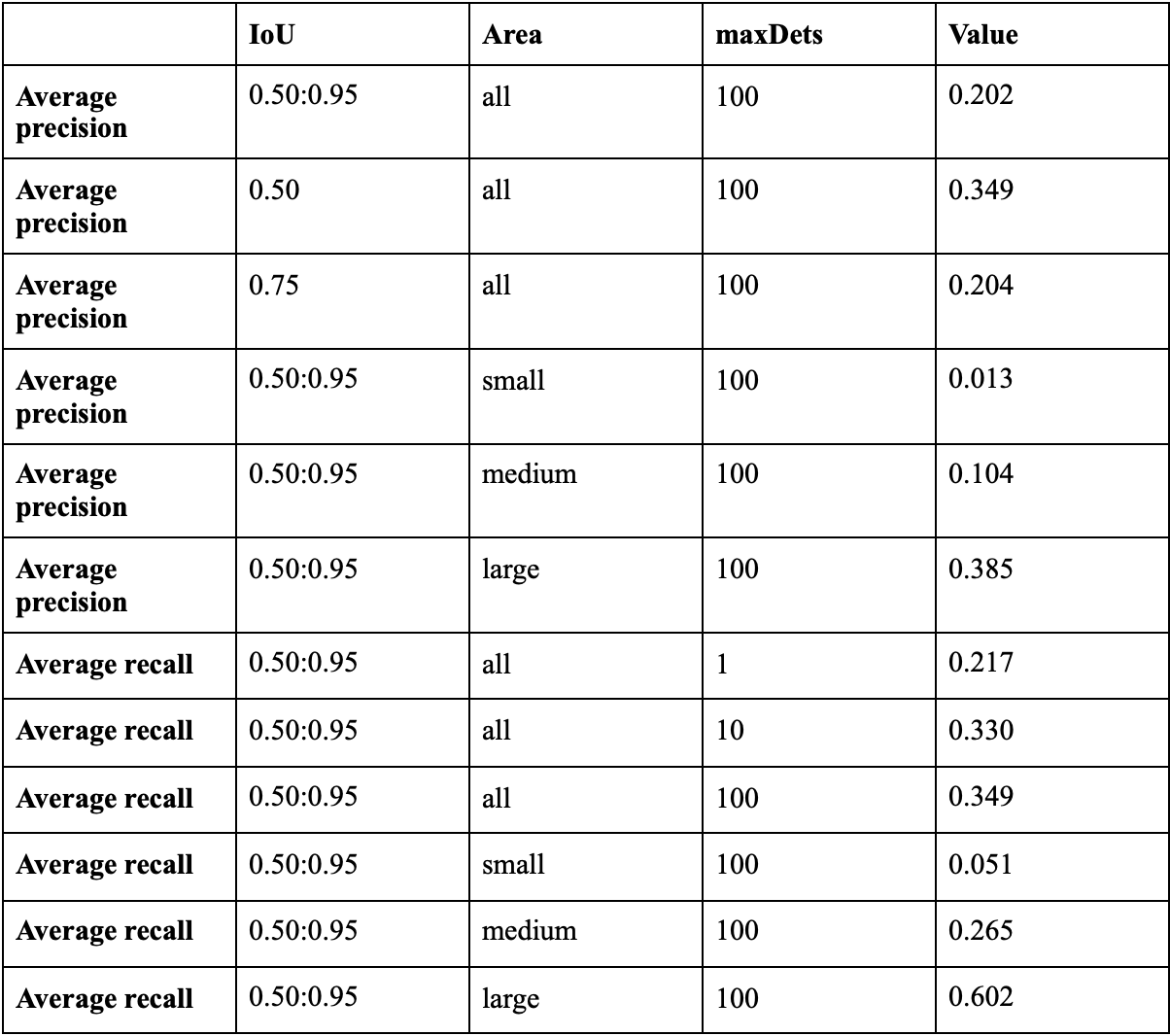 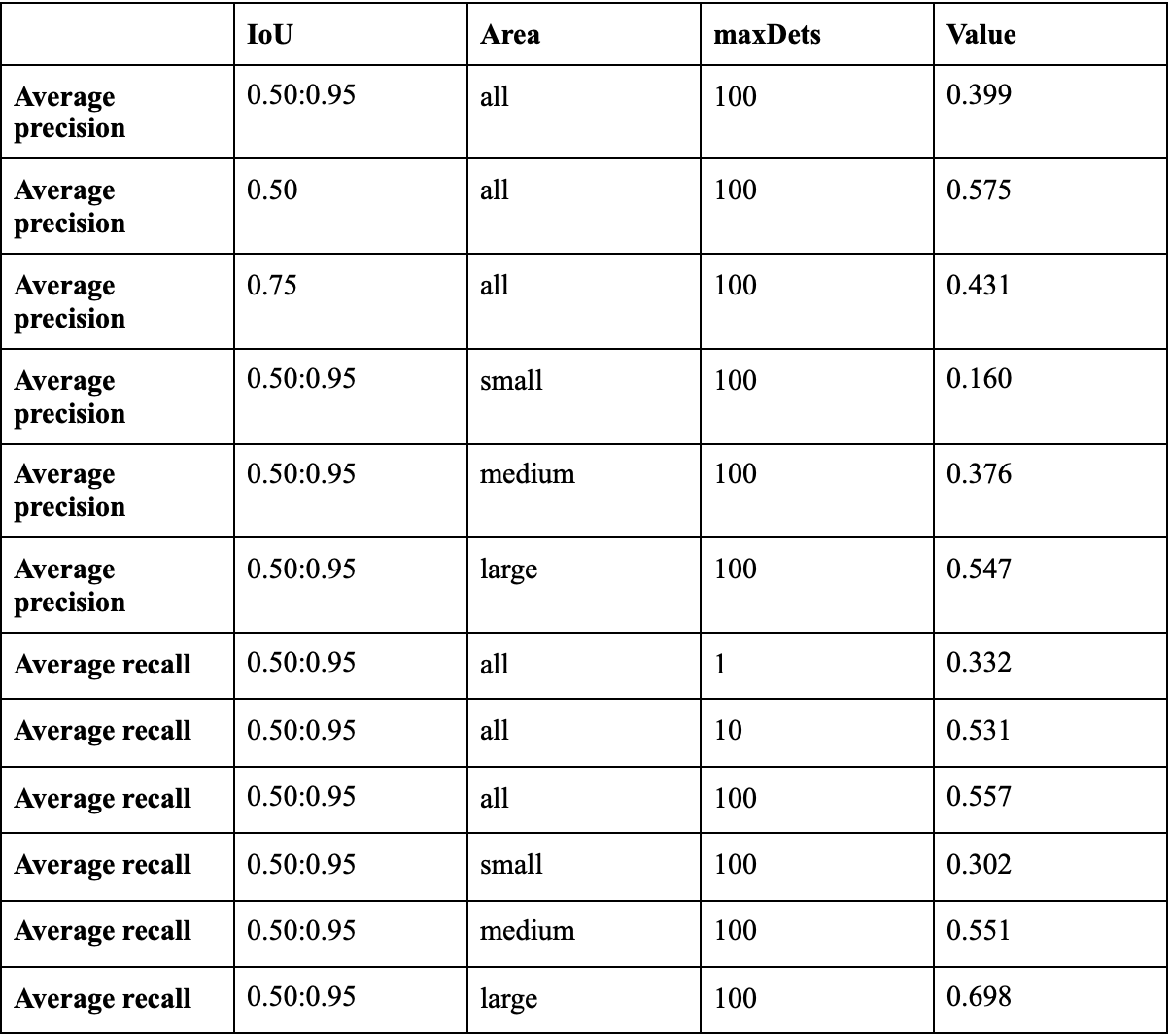 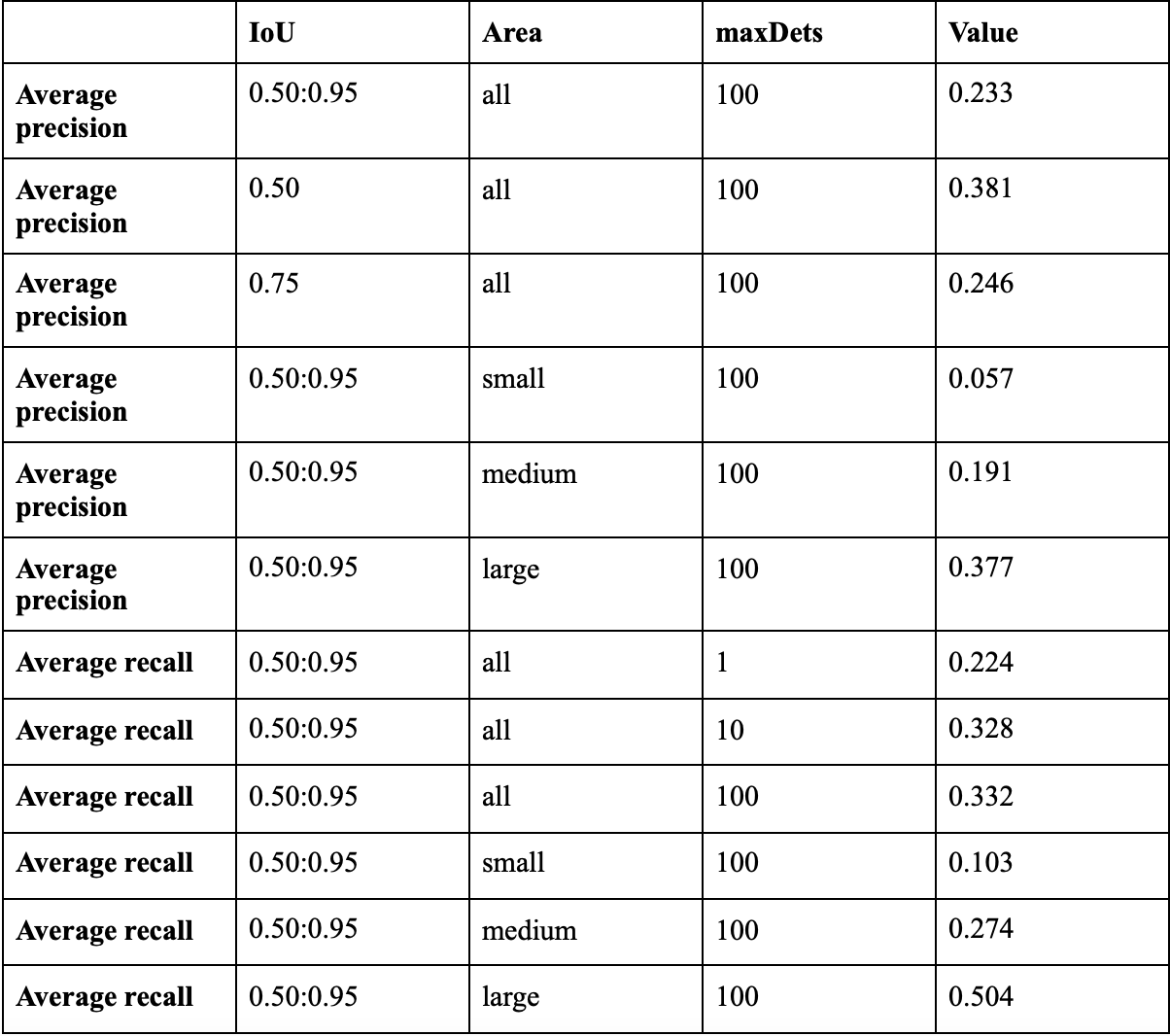 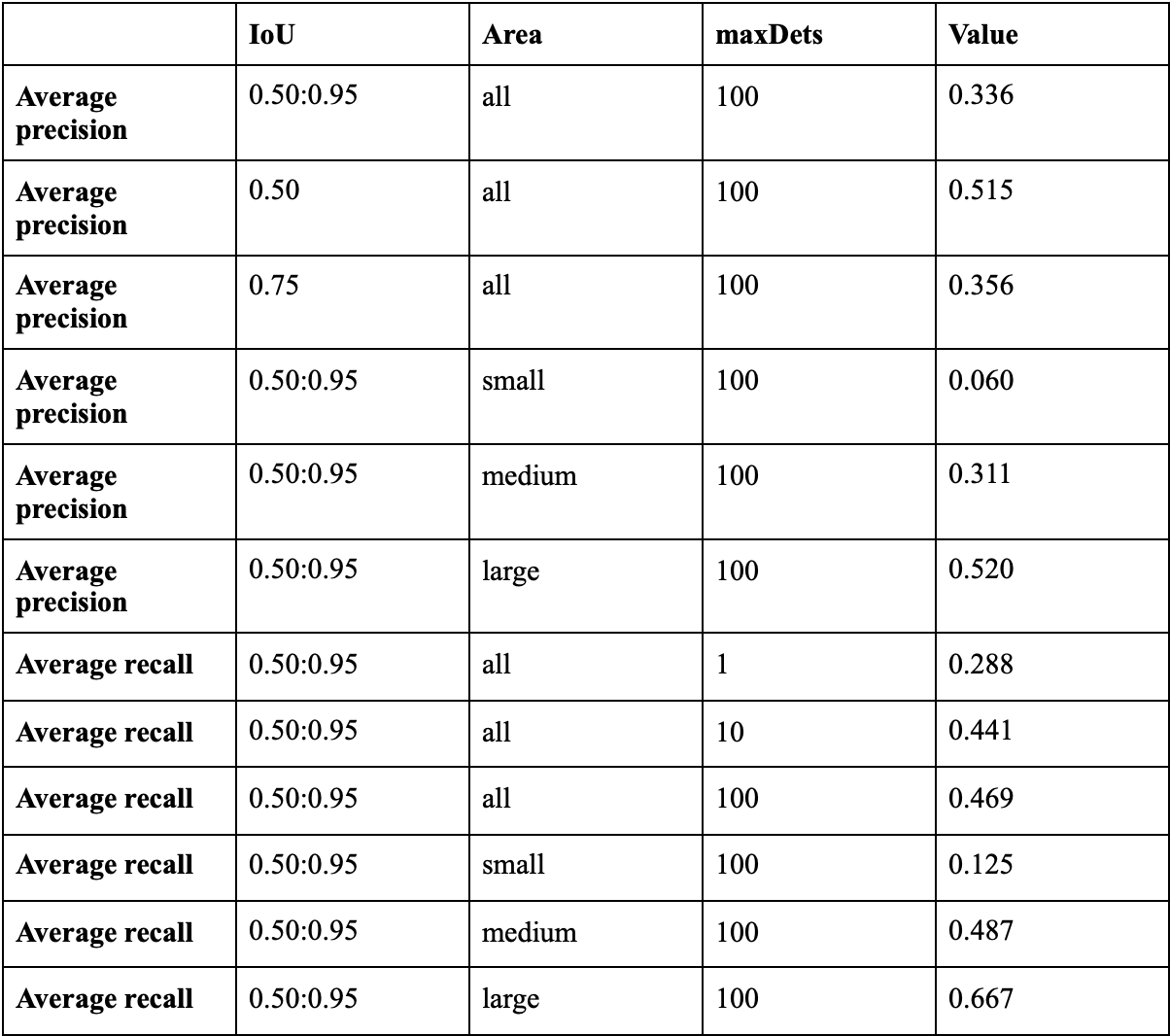 The initials models to evaluate were Tiny-YOLO, SSD and R-CNN, but there were some problems. The idea was to search for repositories with these models in a compatible format with Keras or Tensorflow, but some of them were 3-4 years old so appeared some problems relate to installing the exact version of Keras, Tensorflow, Numpy, etc. As a consequence of this, only have been evaluated a version of R-CNN call Mask R-CNN. Luckily, one of my tutor suggested me to use the tensorflow object detection zoo and after some minor problems with getting the data in tfformat, I was capable of evaluate the models and as this was really quickly we decided to evaluate more models to compensate that we cannot evaluate the Tiny-YOLO model.